You are here was what the map said as I stood inside the hospital atrium.   I kept looking at the map trying to compute where I was and how far away food could be.   It had somehow been many hours without food, I remember realizing as I stood there.

Why isn’t there anything decent to eat at 8 pm in a hospital I had thought?  How many times had I passed family members at my own hospital in the hallways with the same worn-out expressions on their faces?  What don’t we provide better nutrition to waiting families I thought?   It appeared I would be subjected to another Starbucks muffin that night, I contemplated, standing there for an unusual amount of time for someone looking for directions.

I stood looking at the multiple tunnels to different elevators, A, B, C, as the floors randomly changed as you walked through the halls.  The hospital I was in was much like the hospital I worked at.  Built somewhere at the turn of the century and then added on as space was needed and procured, but not in any way that made sense if it had been built in the 21st Century. 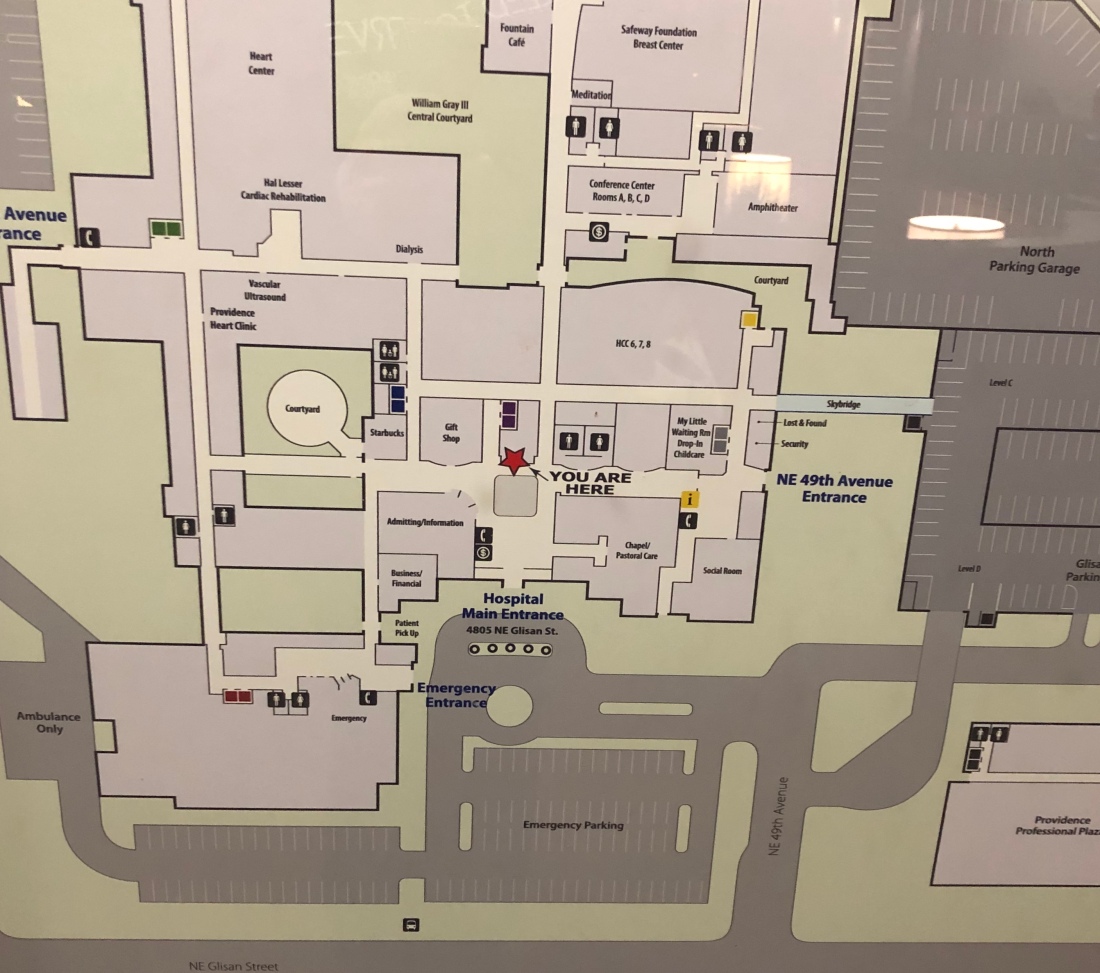 I wandered down the halls in multiple directions looking for the mysterious kiosk that was marked by blue dots on the map, though I hadn’t been quite sure what hallway let to the potential food.  Even in the best of circumstances, I lacked spatial ability.   It was one of the reasons that I would not have made a good pilot overall.   I had spent $18K in my youth after Desert Storm trying to learn how to fly.

Growing up in a family whose funds were limited, parents that when they were around fought all the time, and a mom who worked two to three jobs on average, after many years as a stay-home mom, was why I spent many hours daydreaming about “what I wanted to be when  I grew up,” as I watched my younger sisters most days.

My grandmother filled my head with her stories of being one of the first women in the military.  She told me scandalous stories about young pilots and teaching them how to understand morse code.  She filled my head with her adventures of caring for a platoon of young women until she ran off and married a pilot of her own and had to leave the military.  Women could not be married and in the military back then.  Her daughter, my aunt, had joined the airforce and worked on airplanes.  In my bedroom as a young teen, I dreamed of exciting adventures like theirs.

I joined the military during the pre-Desert Storm era and I was told I could work in air traffic control in a helicopter ambulance unit, but I could not become a pilot with my eyesight.  Looking back, this was one of my first lessons in realizing your plan, is not always “the plan” for you.  Not long after my training, I was sent to Desert Storm where I spent many long nights dreaming of flying at college when I got home.

I got home from Desert Storm and off I went to Bowling Green’s private pilot program.  I was an amazing VFR, without instruments, pilot.  I didn’t need any instruction, I moved the plane as if it was part of my body.  My instructors were baffled. I still remember the feeling of taking off.  The speed and adrenalin as you pushed down the runway and headed up into the air.   I also was a terrible instrument pilot.  My lack of spatial ability had me struggling, my ADHD (at that time unknown), made it extremely difficult for me to focus. Nothing seemed to be going well and I knew I was forcing myself to do something I wanted to do but was not meant to do.  I had spent so long not seeing the forest through the trees.  I was not mean to be there.

During Desert Storm, I had spent months idolizing the helicopter ambulance nurses.  They had the best job.  I worked on maps and the radio and they worked on patients. I went back to military school and asked to be a nurse.  The closest opening they had was as a surgery assistant.  Off I went to school and spent 15 years as a surgical assistant before I went to nursing school. (And now I am here, here reminiscing about how we get to the places in our lives, how to teach my surviving children that life is not all about one dream and one path).

A brain filled with cortisol from stress cannot process a map I remember thinking.  Why don’t we make things less complicated for patients and their families?  It is a thought that hadn’t occurred to me until then.  The information person should be near the map and instead of listing complicated directions that they will only nod to, why not write them down for them? Why don’t we hand out cookies or crackers in the waiting areas?

I wandered through the hallways of the historic hospital, noticing the pictures of benefactors and calming random art placed on stark white walls.  Why are the walls so white?  Why aren’t they a soothing color?  The florescent lights bring migraines on already tired eyes.

You are here.  I had found myself back at the map.  I was thinking about how it would be helpful in life if in times of uncertainty and sadness we could be given a map. A map that showed us where we were but where we were actually going.  We could see that we were not really lost.  The big picture of our life that put that one difficult time period into the perspective of just being that, a difficult time we would get through, leading us on to better things. We could see where we needed to go.  We could understand that even if we are surrounded by only what we can see, such as everything feeling like a roadblock and uncertainty, we have a green amazon forest we cannot see through the trees not far away.

I am pretty sure the cafeteria in the hospital was actually one floor below me that night.  I can see that night with a clearer perspective now that I am not in it.  I write all of this thinking of my daughters that still, and most likely always, are dealing with grief, dealing with being a young adult, and struggling to understand “Where they are.”   I want them to understand that when they feel like they are stuck amongst the trees they should continue to plow forward through the mud of this world, that this is only one snapshot in time, A part of their story, but there is a huge part of their story unwritten.  That they do not need to know where they are going right now, but to know its ok to not have it all figured out, to, “just keep swimming, swimming, swimming,” as Dori says.  That outside the trees where they cannot see is a beautiful, interesting, forest and the path there is not one that is straight, and that’s ok.

4 thoughts on “You Are Here”